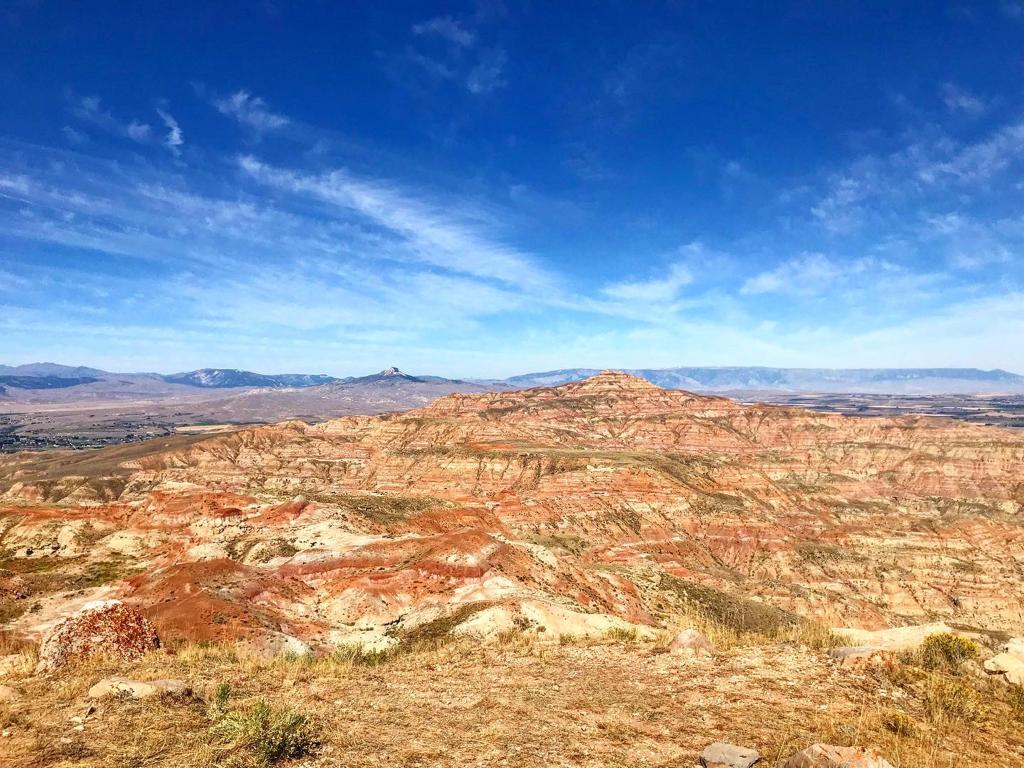 A few miles south of Powell sit a sprawling labyrinth of colorful badland peaks and dry-wash valleys. They are arid, highly eroded, and sometimes treacherous, but they also offer scenic views and fantastic opportunities for appreciating the Wyoming landscape.

Named after scotch immigrant and early cowboy Peter McCulloch, the area has a long history of livestock grazing, as well as harboring herds of wild horses.

Peter McCulloch came to northwest Wyoming in 1879 as the foreman of a cattle drive from Fort Bridger. His boss, Judge William A. Carter, had been invited by Chief Washakie of the Shoshone Tribe to move his sizable cattle herd from the drought-ridden southwestern section of the Territory to the Big Horn Basin, where the grass was still good for grazing.

The cow outfit made their headquarters along a small creek draining the northern slope of a craggy and elongated mass of high rock. McCulloch named both the creek and the mountain after his far-off boss.

Peter McCulloch apparently detested the bleak badland formations south of what was then referred to as the Stinking Water River. Well aware of McCulloch’s feelings, his cowboy friends mockingly christened them “McCulloch’s Peaks” during an 1881 range roundup where local inhabitants had begun assigning names to geographic landmarks. The current “McCullough” spelling was a later error printed on U.S. Geological Survey maps.

Carter delegated much of his livestock and business responsibilities to McCulloch, who pastured all the ranch horses on the southern slopes of his eponymous peaks.

Sometime in those early years McCulloch and his fellow cowboys located a minor spring on the grassy northern slopes of the peaks. They excavated a small dugout into the hillside and regularly brought their herds to water. In 1904 a large stone barn was built at this location by early homesteader Frank Gilmore who used the facilities to raise purebred horses. The barn and adjacent corrals were later purchased by P.E. Markham for use as a lambing and shearing shed for his sheep operation, and then again by the Hoodoo Ranch as a remote cow camp. This stone barn still exists, although its roof has recently collapsed.

Later the McCullough Peaks became a popular area for sheep grazing and overwintering livestock. The southern facing slopes offered good winter forage to herds that often summered high up on their mountain pastures.

Large rock piles are plentiful around the peaks, most being sheepherder monuments or cairns erected to serve as landmarks and informal grazing boundary markers.

The rugged character of the McCullough Peaks deterred most early settlers from permanently occupying the region as they preferred the lush and more easily irrigable lowlands along creeks and rivers. These circumstances have allowed the peaks to preserve a great deal of their wild and pristine landscape.

Today the McCullough Peaks consist of over 23,000 acres of public BLM land with some additional state-owned tracts. They harbor a plethora of outdoor recreation opportunities, from hiking and ATV travel, to horseback riding, trail running, mountain biking, hunting, birdwatching, photography, and wildflower identification.

How to Get There

Access to the McCullough Peaks from Powell, Wyoming on Lane 14 south of town. Additionally, McCullough Peaks can be found via the McCullough Peaks Road #1212 off the Greybull Highway west of Cody, or the Whistle Creek Road #1213 which travels north from the Greybull Highway (US 14/20/16) to Wyoming Highway 32. These are maintained BLM roads with some gravel or dirt surfaces. There are also numerous two-track trails that lead into and around the peaks from every direction. These are fun to travel and discover new routes, although they should be avoided when the ground surface is wet.

No discussion of the region would be appropriate without remarking upon the work of local author and historian Phyllis Preator, who has written two books about the McCullough Peaks and their inhabitants. Her first, entitled “The McCulloch Peaks: Early History & Stories” provides an account of adjacent homesteaders, herders, and ranchers who have historically frequented the area. Preater’s most recent book, “Facts and Legends behind the McCulloch Peaks Mustangs”, highlights the wild horses in the area and the natural history of American mustangs in general.

blog outdoor recreation park county Yellowstone National Park
Only a couple of shows left! Be sure to get your t

The mudpots are located in the 80% of #Yellowstone

Lots of #Wildlife live next to #YellowstoneNationa